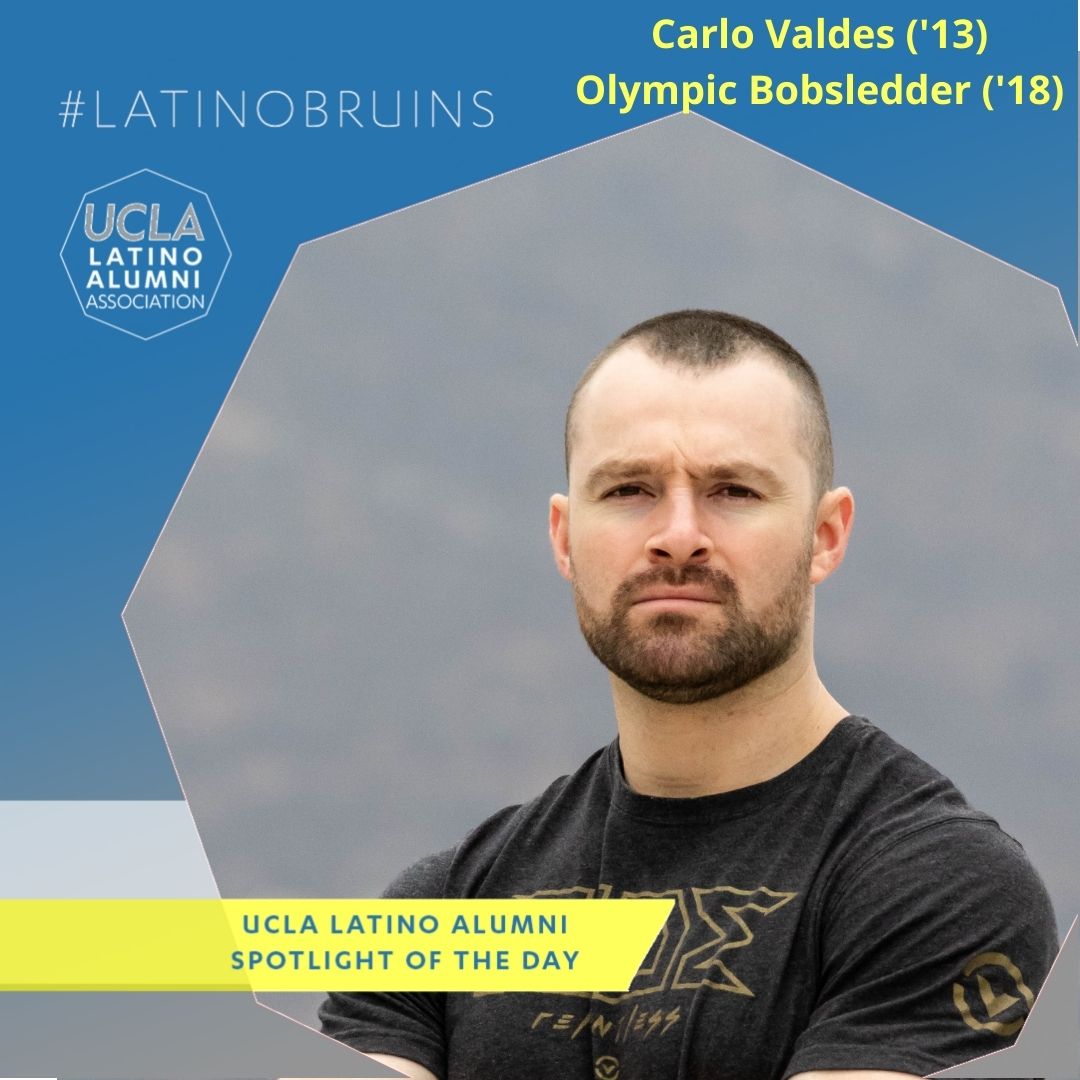 Latino Bruin Carlo Valdes was raised in Newport Beach, California. Carlo Valdes is a three-time member of the USA Bobsled national team. Racing in the USA-1 BMW sled alongside one of the best bobsled pilots in the world and three-time Olympic Medalist Steven Holcomb, Valdes has turned himself into one of the finest brakeman to compete in the two-man and the four-person disciplines. Before joining Team USA, Valdes was a two-sport star (track and football) at Mater Dei High School and UCLA, where he received four varsity letters.

During his rookie season, Valdes was awarded the USA Bobsled Rookie of the Year Award. His season was highlighted by nine top-10 finishes on the World Cup tour. Valdes also helped two-time Olympic Medalist Elana Meyers Taylor make history, pushing her to the bronze medal in the Calgary North American Cup race. The third-place finish was the first-ever medal won by a female piloting a four-person bobsled in an international competition.

Valdes returned to the ice in 2015-16 with even more success, pushing Holcomb to two medals on the World Cup circuit en route to the USA Bobsled Athletes' Choice Award.

In the 2016-17 season, Valdes and Holcomb raced again as USA-1. The duo finished this season ranked second in the world in two-man and third in the four-person. During his first three seasons in the sport of bobsled, Valdes has already accumulated six World Cup medals.

Carlo earned 2 more World Cup medals (Silver, Bronze) in the 2017/2018 season sliding with Codie Bascue and earned himself a spot on the Olympic Team representing Team USA in Pyeongchang, South Korea, where he teamed up with Justin Olsen, Nate Weber, and Chris Fogt.

Valdes took 2 years off from the sport to start a financial services business while still keeping his level of fitness up and made the decision to come back to the sport in 2020. He went on his way to slide with Codie Bascue once again for the 2020-21 World Cup season and just finished qualifications for the Olympic Games next year in Beijing, China.

You can follow Carlo on Instagram @carlosvaldes_usa or check out the Team USA Website to keep up with his journey towards the 2022 Beijing Winter Olympic qualifications. We'll be watching in October when USA teams are named and also in January 2022 when Olympic teams are named!