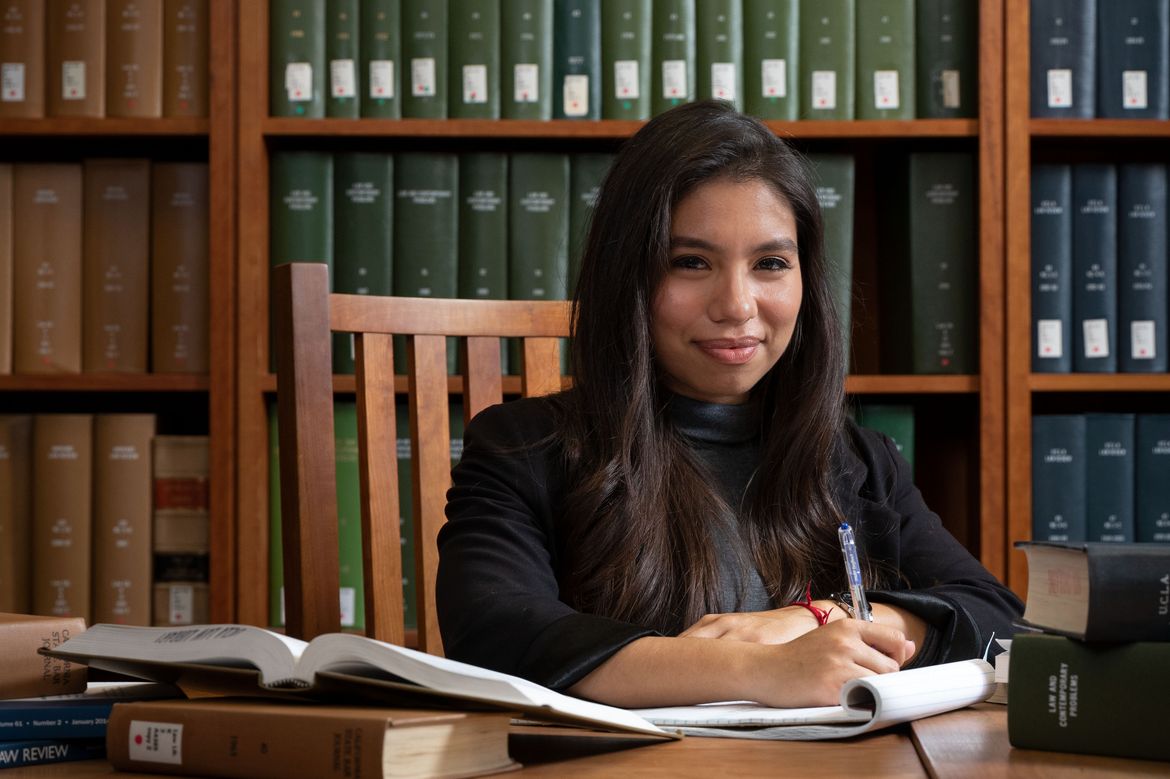 Maria Nava Gutierrez emigrated to L.A. as a child and is poised to make her mark in the law
Joshua Rich | February 26, 2020

Less than a year after she graduated with multiple honors from UCLA, making her the first member of her family to complete a four-year college education, Maria Nava Gutierrez prepared for one of her most daunting challenges yet. Already admitted to UCLA School of Law on the strength of her top grades and impressive undergraduate credentials, Nava Gutierrez was mulling a generous offer of admission from an Ivy League law school but hoping to earn a full-tuition Achievement Fellowship from UCLA Law. All that stood in the way was an interview.

“I remember being very nervous about it because it was a panel interview, and the dean would be sitting on the panel. I imagined a very intimidating room with a group of strangers grilling me on my resume or qualifications,” Nava Gutierrez said. “Instead, we arranged the table in a circle, so we could all talk, and several of the interviewers had gone to UCLA Law together, so it was a bit of a reunion for them. It really showed how much camaraderie and community exists at UCLA Law, which was comforting and helped ease me into the process. It felt like the school was interested in me holistically, not just my GPA or resume.”

She aced the interview and got the fellowship.

Created during the Centennial Campaign for UCLA with $4.2 million in generous donations from alumni and friends of the school, UCLA Law’s Achievement Fellowshipprogram provides full-tuition scholarships to students who have overcome significant obstacles to get to law school. In three years, the program has fostered the success of 24 law students. The first recipients will earn their law degrees and begin studying for the bar exam this May. Along with Nava Gutierrez, they include the president of the graduating class; a winner of a Skadden Fellowship, often considered the top public-interest fellowship in the nation; and aspiring attorneys in civil rights and corporate law who are headed for positions at eminent national law firms and leading nonprofit organizations.

“We launched the Achievement Fellowship program with incredible support from our alumni precisely to reach inspiring law students like Maria who have demonstrated great capacity to achieve and contribute, and who have overcome so much along the way,” said UCLA Law Dean Jennifer Mnookin. “For these students, the cost of law school can be an enormous barrier, and certainly this program provides them with a great opportunity. But it does more than that. Achievement Fellows benefit our law school community and the legal profession as a whole, and this program deepens UCLA’s commitment to access and public service.”

Nava Gutierrez emigrated with her family from Mexico to Los Angeles when she was 6, and today she benefits from the Deferred Action for Childhood Arrivals order, or DACA. She became fluent in English while her parents worked 15-hour days — without health care and under fear of deportation — so they could afford to live in a good school district. Her mother often reminded Nava Gutierrez that she would have to work “twice as hard to get even half” of what other kids with citizenship had.

That message, along with her parents’ sacrifice, resonated. During the 2012 presidential campaign, Nava Gutierrez traveled to battleground states where she shared her immigration perspective with voters. She spent countless hours mentoring undocumented preschoolers in Los Angeles, helping them learn English. And she excelled at UCLA, making the dean’s list while majoring in philosophy and Chicana and Chicano studies, holding a leadership position with the Bruin Democrats and conducting probing research on the psychological challenges that undocumented college students face.

All the while, the cost of tuition was a pressing concern that Nava Gutierrez addressed by securing several scholarships. As she turned to law school, she was once again confronted by the fact that, due to her status, she was ineligible to receive student loans. Her longtime dream of attending law school “came down to either having scholarships or attending school in a different country,” she said. “When you look at that choice, it’s absolutely the case that, without the Achievement Fellowship, I would not be where I am now.”

Today, Nava Gutierrez’s law school calendar is filled with a robust array of academic and extra-curricular commitments, including work as co-chair of the student-run Youth Deportation Clinic, which partners with the Central American Resource Center to provide legal assistance to unaccompanied children who cannot afford representation but seek to remain in the country and secure a path to citizenship.

After graduation and the bar exam, she will join the national law firm Venable in Los Angeles, where she will focus on corporate transactions. In the long term, she hopes that her career focus shifts back to privacy issues around artificial intelligence — interests sparked by innovative courses that she took at UCLA Law and further honed during the full-time externship that she held at a Washington, D.C., think tank during her second year of law school.

It is an exciting path for Nava Gutierrez, who fondly remembers dancing ballet as a preschooler in her hometown of Colima, Mexico, and who continues to push herself through weightlifting, camping and horseback riding.

“I don’t think I would have enjoyed law school or flourished as much as I did, both personally and academically, had I attended law school anywhere else,” she said.

As her final months at UCLA Law wind down and she turns to her next big challenge, Nava Gutierrez stays grounded through the one thing that has kept her going all along: her family.

“I have always known that I wanted to go to law school; I lived my life watching my parents trying to understand the immigration system,” she said. “So, to me, getting this far in my academic career has granted me immense privilege, especially compared with other people with my same immigration status. I’m always focused on how I can use that privilege to raise up the people who come after me. No one gets anywhere without the help of others.”